A part of a possible WBS for the construction of an office building is illustrated below. More levels can be added to the existent ones such that each activity is planned in more and more detail.

To create the tree structure corresponding to your WBS, you enter at first the summary and child tasks on the same level, each summary followed by its children. Then, you indent the child tasks by using one of the following options:

When you indent a task, it becomes a subtask of the nearest preceding task at a higher outline level. The preceding task becomes a summary task and it is highlighted with bold font. You create a summary task by indenting the task directly following it (in the order of task ID numbers). You can move a task to a higher level by outdenting, unless it is already at the highest level.

You can indent the tasks as many levels as you need to reflect the organization of your project. Using outlining, you can create up to 10 indented levels of tasks in your task list.

Step by step how to organize task using Indent / Outdent:

2. Click the row for the task that you want to indent as a subtask or outdent as a summary task.

3. Click Indent to indent the task, making it a subtask.

4. Click Outdent to outdent the task, making it a summary task.

You can indent a task quickly with the mouse. Point to the first letter of the task name. When the pointer changes to a double-headed arrow, drag right to indent the task or drag left to outdent the task.

To indent multiple tasks at a time you should first select the tasks that you want to indent. To select multiple tasks press on the cell containing the ID of task then hold SHIFT or CTRL key for contiguous, respectively non-contiguous selection. Then select the Indent option or use the mouse to indent the selected tasks. 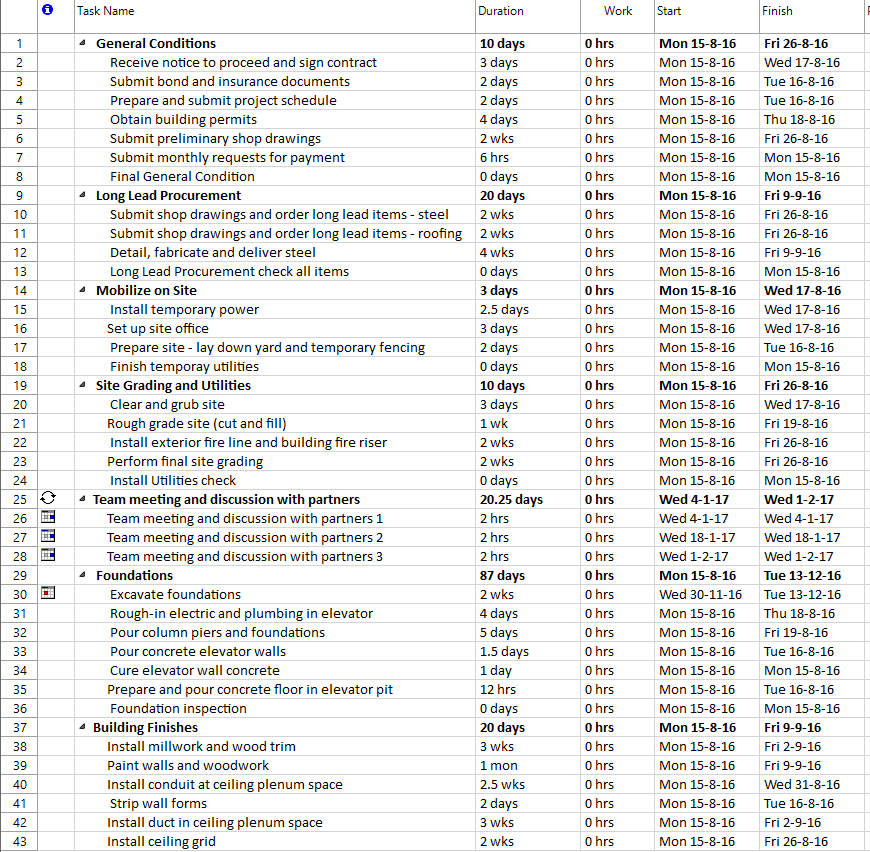 2. Notice the new durations and start and finish dates for the tasks that now have become summary (displayed in the above figure with bold font). Because Project Plan 365 calculates the summary task values, they cannot be edited. If you need to change a summary task's values, such as duration, you need to update the individual subtasks. Summary task values will be then recalculated. In the right side part of the Gantt Chart you will see that the bars corresponding to summary tasks are drawn in black and has a different shape than the rest of the tasks. 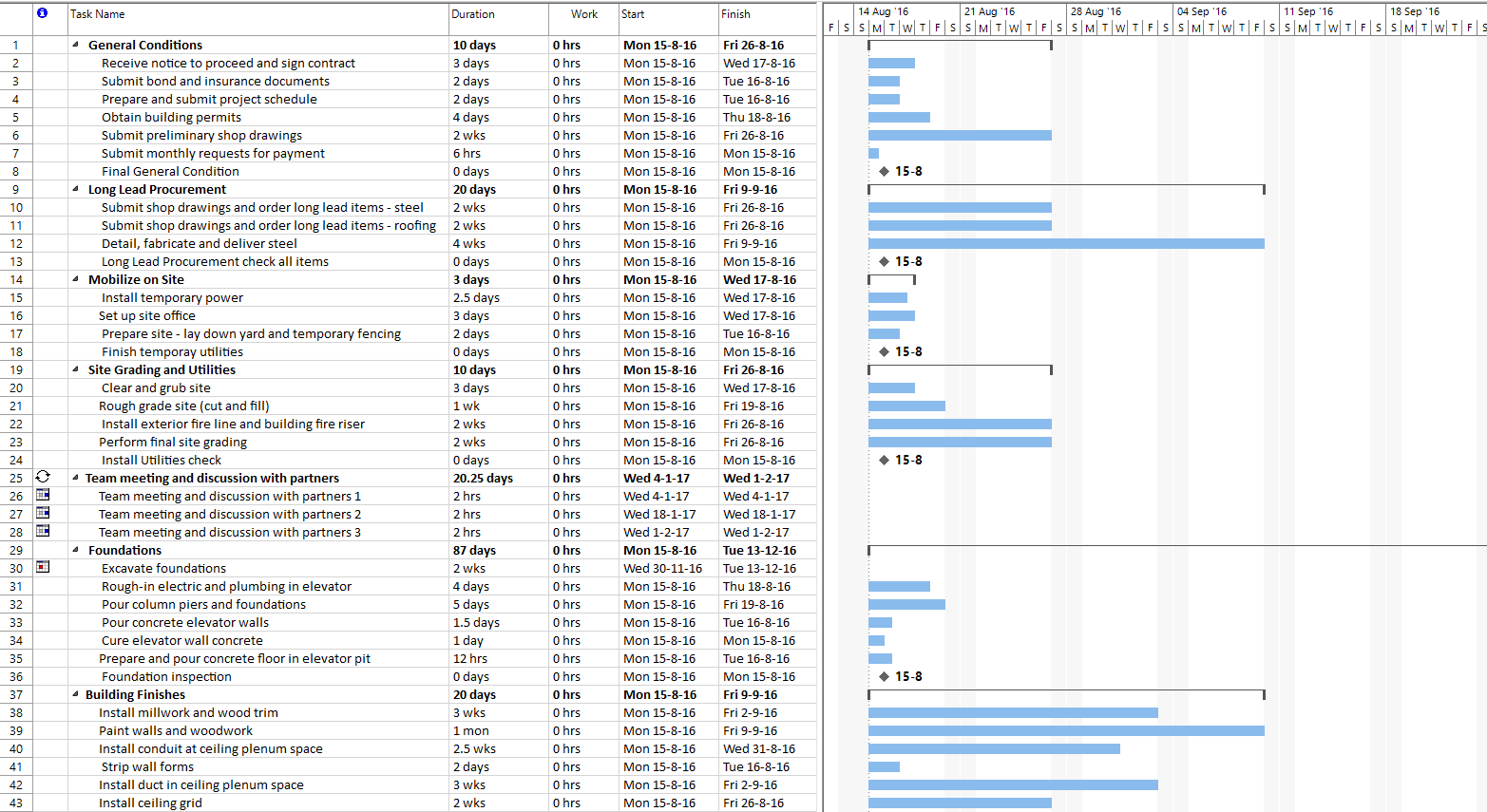 3. You can expand or collapse a summary task by pressing on the sign to the left of a task name. By collapsing and expanding an outline, you can hide or display the subtasks of a summary task. You can also collapse or expand specific parts of your outline, highlighting or hiding the tasks or group of tasks you want.

If you collapse task with ID = 9 (Long Lead Procurement) you should get the following. Notice the tasks that currently are not visible anymore in the Gantt Chart view:

Press again the sign next to the task name to expand the task.

4. You can use the Outline option from the Project menu to see only the tasks at a specified outline level. To show only part of the outline (A hierarchical structure for a project that shows the tasks groupings), select from the opened Show window the outline level number up to which you want to view. 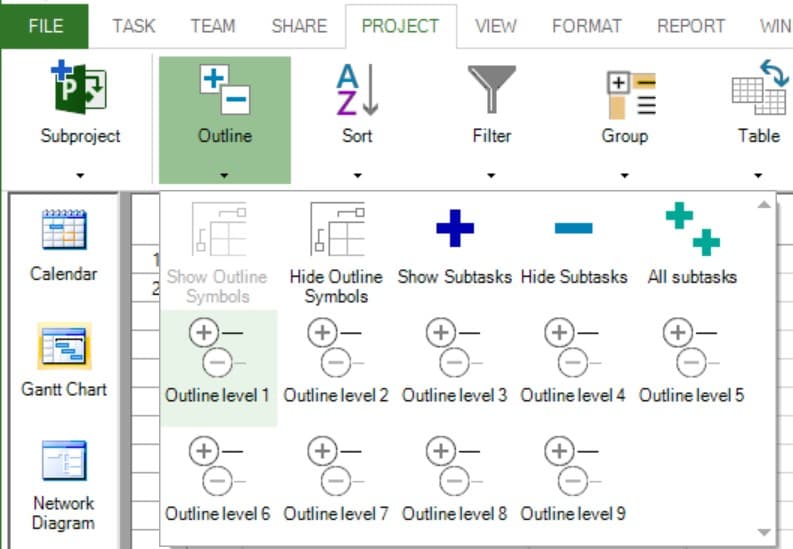 If you choose to select Outline level 1, you should obtain the following:

To display again all tasks in your project select Outline option and in the shown dialog choose All subtasks.

If you prefer to see things in action, rather than reading text, watch out this video, which covers some of the topics from this section.